Fuels for Schools was started in Vermont as a statewide initiative to promote and encourage the use of renewable, local natural resources to provide reliable heat for schools. It has since grown into a multistate program, and has recently expanded its scope beyond schools.

The Hurst Boiler and Fuels for Schools objectives:

To promote and encourage the use of wood biomass as a renewable, natural resource to provide a clean, readily available energy source suitable for use in heating systems in public and private buildings. To facilitate the removal of hazardous fuels from our forests by assisting in the development of viable commercial uses of the removed material.

In late 2001, Fuels for Schools was started in the Northern and Intermountain regions of the USDA's Forest Service. The previous summer, fires ravaged much of the Bitterroot Valley of Montana and Idaho, says Dave Atkins, the Fuels for Schools program manager for the Forest Service's Northern and Intermountain regions. Following the fires, Congress passed the National Fire Plan, which was aimed at reducing wood that could possibly fuel fires and fire suppression. It included funds to help with small-diameter wood utilization, which is not as valuable to the wood industry, is fuel for fire and costly to dispose of. A community group saw Vermont as an example, and applied for funds from the Forest Service for the first school demonstration project in Darby, Mont. From there, a regional program was developed.

There are now systems operating in Montana, Nevada, Idaho and North Dakota. Wyoming and Utah are working to identify their demonstration communities. Within these states, 16 projects have been installed or are in the design phase. Hurst has partnered in three Biomass Boiler installations thus far, and plans are underway for several more. 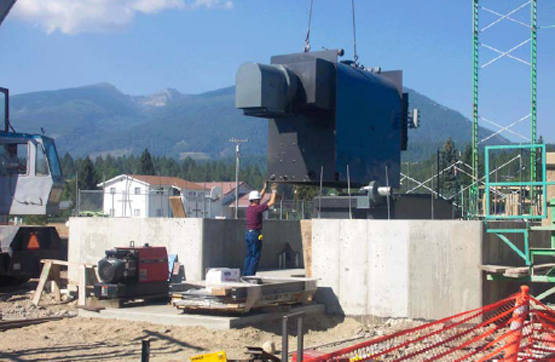 Atkins says the localized systems fill an important niche. “The advantage is you're closer to your source of material, so you keep transportation costs down," he says. “If you are consuming heat and energy on site in your local area, you don't need a lot of transmission lines for moving the energy product to the end user."
Designing wood boilers for schools requires unique considerations compared with other boiler systems. Salmon explains that most boilers are designed to meet peak load, but that peak load happens very infrequently—less than 15 minutes every five years. With conventional gas boilers, this usually isn't a problem, as they operate efficiently at a small fraction of their capacity. “Wood boilers function well at high fire, and less so at lower fire," Salmon says. “In general, we design wood boilers for less than peak load, to work productively for much of the year."

Both Salmon and Atkins emphasized the savings—both time and money—in implementing a biomass system in new construction. “The cost of the system is a good one-third less than a retrofit," Atkins says. “There is no cost to integrate the plumbing and connections, and it's part of a bigger project, so the building permits and design fees are spread over a bigger project." This savings was demonstrated this spring at a new high school in Kalispell, Mont.
Expanding to Other States

The Fuels for Schools program may expand to other states. The Farm Bill, which is in Congress right now, includes a section on wood-to-energy within the forestry title. “If that legislation passes, that would likely be an opportunity for our effort to be expanded throughout the United States in a similar fashion to what we've done," Atkins says.

As the program expands into less forested states, the motive in pursuing these biomass projects becomes less about managing excess biomass supply and more about utilizing renewable energy sources. Nevada, which has a renewable energy portfolio, is such a state. Ironically, one of the most recent Fuels for Schools projects, and also the largest, is not in a school.

Enter the Northern Nevada Correctional Center in Carson City, Nev., which, along with Hurst Boiler & Welding Co., Inc. of Coolidge, GA, completed the installation of a $6.4 million biomass system in June. The combined-heat-and-power system, producing one megawatt of electricity, will require 16,000 tons of wood per year. This is huge compared with the other Fuels for Schools project in Nevada, which only requires 150 tons of wood per year.

The Hurst Biomass Boiler and a 200-kilowatt photovoltaic solar component will provide all of the electricity, heat and hot water for the 408,000 square-foot facility. The project took 1½ years to plan and about seven months to construct. The system is estimated to save the NNCC $1 million per year. “The payback will be very quick," Perock says. “Forestry agencies are driven by the number of acres treated, not by biomass removed," he says. “In Nevada, we're trying to make a market for wood waste. When the market goes up, it will be easier to justify going out and getting the wood from the forest."

Fuels for Schools requires that half of a project's fuel supply comes from the forests. But Perock says he is not holding the correctional facility to those standards. “We have to get the supply wherever we can, because it all counts—whether you're pulling it out of the woods where it's going to be burned in piles or pulling it out of the landfills where it's going to be buried," he says. The plan is to buy wood from Carson City Renewable Energy, a wood processing facility that diverts and processes wood waste from the local landfill.

Like it is in Nevada, the regional Fuels for Schools program will continue to expand beyond schools, where appropriate. In an analysis of all buildings with boiler systems in Montana and Michigan, CTA's Salmon says that only about 10 percent are strong projects, meaning that the cost of converting to a wood heating system would generate a positive cash flow in the first year. Energy conservation should be the first thing that everybody considers."