A $235 million dairy plant being built in Garden City, Kansas is expected not only to bolster the area’s growing dairy industry, but also provide jobs, grow ancillary businesses, and provide another source of water to the city.

In August 2015, the Garden City Commission approved a development agreement with Meadowlark Dairy Nutrition, LLC, a subsidiary of Dairy Farmers of America, to build a USDA dairy dryer milk processing plant and related facilities on 156 acres on the east side of U.S. Highway 83 between the Burlington Northern Santa Fe Railroad and the Arkansas River. The plant is being built on city-owned land near the Jameson Energy Center.

Construction of the approximately 321,000-square-foot plant began in October 2015 and is estimated to be complete by the end of May 2017.

Officials anticipate the Meadowlark plant will create 55 jobs with an average annual salary of $61,000. City Manager Matt Allen said the job creation alone is a big plus for the area.

“The job creation is nice, and not only is it quantity of jobs, but the average wage of the job certainly is higher than what we’ve experienced in recent years in recruiting industry,” Allen said.

DFA is a milk marketing cooperative owned by 14,000 dairy farmers across the U.S. that distributes its member dairies’ milk to processing plants, where it is made into products like cheese, ice cream and butter.

Sixteen southwest Kansas dairy producers are members of DFA. Of those, 12 are member partners who are investing in the Garden City plant, including Dan Senestraro, owner of the East Side Dairy in Johnson City and chairman of the Southwest Kansas DFA. 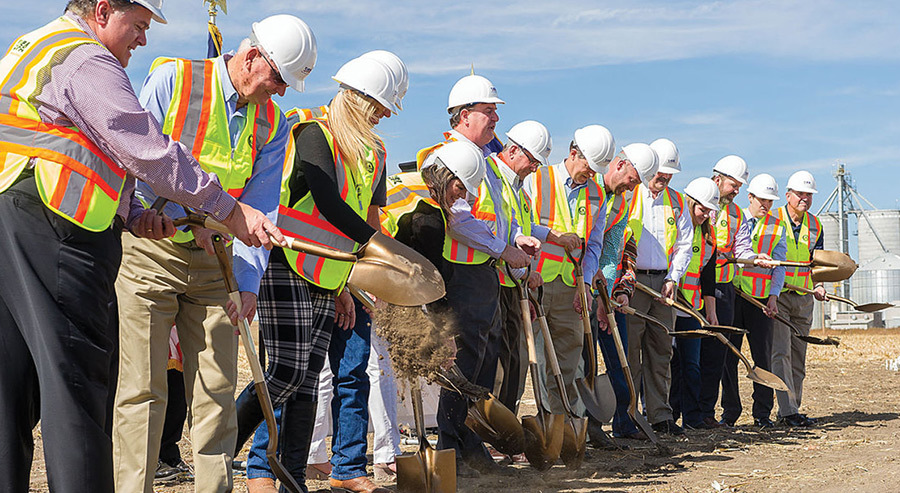 At the plant’s groundbreaking ceremony in October, Senestraro said having a plant in such close proximity to his dairy will help boost his production.

DuVall said the FCEDC had been negotiating with DFA about bringing a plant to the area for about four and a half years, but the organization had actually been involved with recruiting dairies to the area for the past 20 years, with the goal of making Finney County the western Kansas hub for dairy.

Twenty years ago, she said, there were no dairies in western Kansas. Now, there are close to 200,000 head of dairy cattle in the western half of the state, and more dairies in the area are going through the permitting process.

Neighboring communities in western Kansas credit the dairy business for their survival.

“Quite frankly, a lot of the school districts in those neighboring communities are still functioning and are actually growing today as a result of the dairy industry,” DuVall said.

“So anything we could do to support their efforts, and really to make their businesses more economically viable, was important to us in our support of the region.”

As the dairy industry in western Kansas grows, so will ancillary businesses, such as animal pharmaceutical companies and companies that specialize in repairing dairy equipment.

“I think probably one of the most under-celebrated but most exciting things about that plant is the re-use of water, the recapture of a net of about 800,000 gallons of water every day. It’s huge for this region,” DuVall said.

As part of the development agreement between Meadowlark Dairy and the city of Garden City, in return for a lump sum payment of $2.5 million, the city will “pre-purchase” treated effluent wastewater generated by the plant in its first 20 years of operation, which will offset treated municipal water being used for irrigating city parks and other non-potable uses.

The development agreement between Meadowlark and the city includes a 10-year lease of the city-owned tract of land with an option for Meadowlark to purchase it within one to five years for $1 million, or within six to 10 years for more than $1.26 million. The company will pay the city $15,000 per year in rent.

“On behalf of Hurst Boiler Co. and it’s +230 employees we would like to congratulate Mr. Bruce Young of A.B. Young Cos. (Hurst reps in Indianapolis) in the very successful venture with Shambaugh & Sons (design/build contractors) for the construction, equipment and installation of the largest milk processing facility in North America.

This is quite the project with some state of the art Hurst equipment, utilizing our latest technologies. It has been my pleasure to manage this Hurst Boiler project while working with Bruce Young, Byron Koch and Lou Schaub.”, said Ray Pierce, US Sales Manager for Hurst Boiler & Welding Co. Inc.