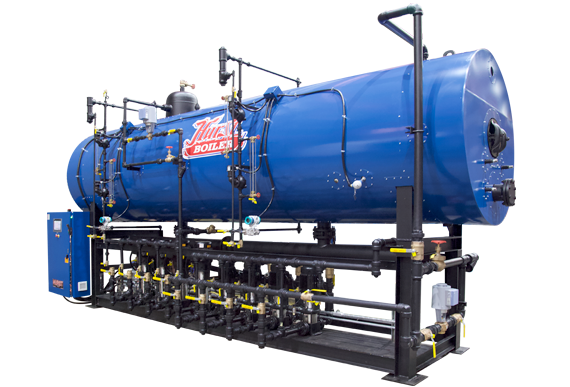 The Hurst Dual-Tank Oxy-Miser “DOM” series boiler feed system is a spray-type Deaerator and condensate surge tank packaged together as a single unit sharing a common stand and pump header.

All Deaerators are ASME Section VIII unfired pressure vessels, which must be taken offline from time to time for inspection & maintenance as required by jurisdictional authorities and/or insurance providers. The Hurst DOM DA/ST combo tank is available with emergency cross-over piping which allows the surge tank to act as a temporary boiler feed system, keeping the boiler plant in operation while the DA is out of service.

The use of deaerators has long been used in power plants and water tube-type boilers, primarily because they remove undissolved oxygen and raise the temperature of the feedwater. These advantages are important today
for firetube boilers as well, due to higher capital investments. Operating costs can be reduced by recovering flash steam when returned by high-temperature condensate. This feature also raises the feedwater temperature, thus requiring less boiler fuel to convert the feedwater to usable steam.

Boiler tubes, condensate lines, and process piping have a much longer useful life by eliminating the pitting action of untreated water. This advantage alone justifies the cost of a DOM Series deaerator.

How Does it Work?

Fresh make-up water is fed into the deaerator through the inlet water connection. This water passes through the steam-filled heating and venting section. The water temperature is raised, and many of the undissolved gases are released. As the water passes through the assembly, it flows to a scrubber section where final deaeration is accomplished by scrubbing the water with oxygen-free steam. This steam is induced through a stainless steel spray valve assembly which causes the high-velocity steam to break the water down to a fine mist through a violent scrubbing action. The deaerated water spills over to the tank's storage compartment for use by the boiler, and the gases are vented to the atmosphere.