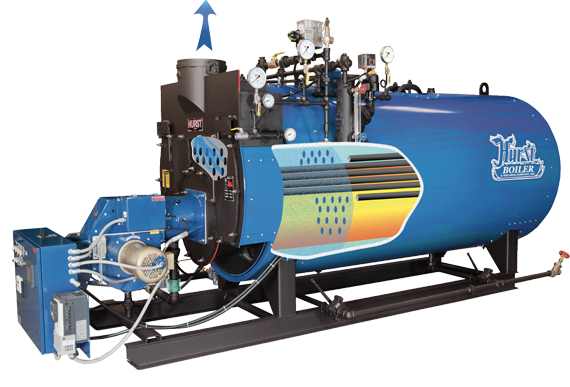 This optional counter-flow device is a revolutionary advancement in the design of conventional fire tube steam boilers, and Hurst has received a patent confirming this design for improving boiler efficiency. The advanced design and engineering developed by Hurst aids in lowering stack temperatures by utilizing make-up feedwater and exhaust gases in a whole new way as a means to increase overall boiler efficiency. Our patented Thermal Master Counter Flow Boiler Series utilizes a unique water-to-flue gas counter-flow design. This optional counter-flow device is integrated inside of the pressure vessel, and factory built into our innovative new Counter Flow Boiler Series. It requires no external support, and therefore does not require installation and labor costs that typical external economizers require. Fuel-to-steam efficiencies can be increased by 3- 5%, depending on working conditions. This optional design feature can be added to any of our packaged Fire Tube Series and Heat Recovery Boiler Systems, depending upon your individual level of desired efficiency requirements.

In accordance with patent approval, calculations were performed by computer model of this boiler under typical conditions. It was determined that the design improves the efficiency of the boiler by as much as three to five percent, relative to other boilers having traditional designs. In other words, this new internal, integrated design performs the function of an economizer typically used with conventional steam generation systems, to capture the lost or waste heat from the hot flue and stack gasses of the boiler. In conventional boiler designs, the economizer is a device that has separate housing and ductworks, in addition to the boiler housing, providing a bulky assembly. In contrast, these new Hurst designs give the user an opportunity to save on economizer housings, ductwork and on overall boiler room expenses.