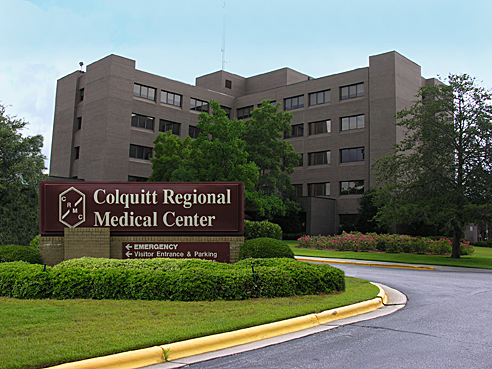 A $7.3 million central plant with N+1 redundancy on the chillers, generators and boilers in a small hospital in rural southwest Georgia -- a dream?

The dream of Colquitt Regional Medical Center (CRMC) and its Director of Facility Operations, Bob Howe and his assistant, Rick Stolarski is now a reality! The challenges faced by Bob Howe, and Hurst Boiler & Welding Co., Inc., Thomasville, GA, the design and construction team, were numerous, and required exemplary teamwork.

Colquitt Regional Medical Center, located in Colquitt County, City of Moultrie, Georgia. With the facility experiencing increased demand for services, Bob saw the potential for more efficiently and effectively providing such by redesigning/reconfiguring some of the existing facilities and equipment. Original estimates for a new plant ranged between $12 and $14 million dollars. Direction was given by James R. Lowry, CEO and President, and CRMC's Board of Directors to reduce overall project cost and to bring it in within budget.
Changing the overall approach to project methodology

Bob accomplished the reduction in cost by changing from a traditional design, construction and bid process, to a team design and negotiated contract price approach. All team members would have an equal and viable interest in the design, cost, and overall success of the project. KLG, Inc., a mechanical, electrical plumbing and fire protection consulting firm based in Atlanta, was commissioned in March 2002 to conduct an overall survey and MEP analysis. Lyman, Davidson, Dooley Inc., healthcare architects were retained as a sub-consultant to provide architectural, structural and civil engineering services.

The concept design was based on a totally separate structure some 250 feet away from the existing medical center, connected by an underground piping and conduit "umbilical". Phase I would be the new plant. In Phase II the existing plant would be demolished in part and renovated after the new plant and systems were online. The final engineered design, construction documents and a negotiated Guaranteed Maximum Price (GMP) contract was signed with Brasfield & Gorrie on July 23, 2003 at a cost of $7,370,356. The team approach had achieved a reduction of $6,000,000 in the total project cost.

The entire boiler, chiller, and normal and emergency electrical systems had to be replaced while the existing ones remained operational. The HVAC and electrical systems were part of the original 1974 construction, well beyond their normal expected operating life. The existing central plant consisted of two 1965-vintage Cleaver Brooks 600 HP, dual fuel boilers, producing 125 pound steam. The system fed, among others things, a full laundry operation and a 650-ton single-stage 1970 Trane absorption chiller. A second 600-ton electric centrifugal chiller rounded out the chiller plant. There were approximately 125 tons of stand-alone DX systems serving the medical center.
The team decided to design the new plant with two new 500-ton electric centrifugal chillers (0.58 Kw/ Ton) and relocate the existing 600-ton chiller. The total anticipated load once the old DX systems were changed out would be about 850 tons. The master plan called for 100,000 sf of additional space to be added over the next 10 years. Total peak cooling load will be approximately 1300 tons. The existing equipment will be changed to run 500-ton and 800-ton chillers to meet peak demand with the remaining 500-ton capacity chiller as a backup.

Hurst Boiler and Welding Company, Inc. was selected as the manufacturer of the boilers, deaerator, and surge tank systems. Hurst has Corporate Headquarters within 10 miles of the medical center, and one of its four worldwide factories located in Moultrie. Hurst is the largest manufacturer of steel boilers in the United States, with over 500 installations in the medical center and healthcare industries. When designing the boiler system, Hurst Boiler & Welding seized the opportunity to use CRMC to showcase the latest developments in boiler systems and technology, according to Ray Pierce, Packaged Boiler & National Sales Manager, Hurst Boiler & Welding Co., Inc. Due to the high level of exposure of the new boiler room, Hurst wanted to implement the very latest engineered boiler technologies. The old 600 hp C-B boilers were operating at about 70% efficiency and were oversized. The new Hurst boilers are 200hp each, operating at 83% efficiency on natural gas, and 86% efficiency on fuel oil. In addition to the premium efficiency of the boilers, variable speed drives were used for the burners and the boiler feed pumps. All of the motors are premium efficiency. Electrical savings are nearly 50% of the previous system. The new boilers use state-of-the-art controls which have effectively eliminated the use of linkage-type fuel and air-ratio controls. The new Hurst solid-state control systems use servo-motor driven fuel and air control valves, which guarantee very accurate burner control. Though not required, the boilers were specified with low emission requirements. Utilizing induced flue gas recirculation and high-swirl power burners, these boilers are operating on natural gas with < 30 ppm NOx emissions. Since the medical center has highly fluctuating steam loads, the boilers have optional high-turndown features, and operate as low as a 10:1 ratio. In addition, maintenance personnel are able to monitor the boiler, deaerator, and boiler feed pumps from both local and remote locations within the facility. According to Ray Pierce, the plant is being used as a model and benchmark for state-of-the-art boiler technologies, and has been shown to visiting consulting mechanical engineers and contractors on a frequent basis.

The project development and the resultant outcome demonstrate what a dedicated and knowledgeable team including a resourceful and decisive owner, an experienced design team, and a group of experienced healthcare contractors with a "can do" attitude can accomplish.

Bottom-line- by changing the methodology and implementing a team approach, the overall design, engineering and construction costs were reduced by $6,000,000.