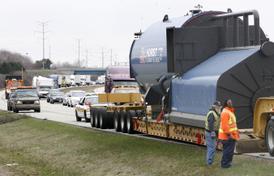 ROCKFORD — A tollway ramp and part of U.S. 20 have reopened after authorities freed a semitrailer that backed up and could not make it under the Perryville Road overpass.

The incident occurred about 8:55 a.m. when the truck's semitrailer failed to travel under the Perryville Road overpass because its load, a boiler, was too high. The load was more than 15 feet high, Illinois State Police Trooper Brent Massingill said. The Perryville overpass has a clearance of 14 feet, 10 inches.

Massingill, who coordinated efforts between the state police, Winnebago County sheriff's deputies and Illinois Department of Transportation employees, helped get the truck off the road, using one lane of U.S. 20 west of Perryville Road and the eastbound on-ramp less than a mile west.

The driver, whose name was not available, was following a route mapped out by the Department of Transportation and was not ticketed.

Authorities cleared the scene at 2:15 p.m.