The fundamental justification behind purchasing a solid fueled boiler is that the fuel used is a cheaper alternative to oil and gas, which can lead to faster payback rates. Years ago, all boilers were solid fueled; however, the convenience of oil and gas piping along with declining fuel prices, rising labor costs, and strict EPA regulations has raised questions as to which type of boiler will save more money.

Nonetheless, even with modern engineering, savings in a solid fueled boiler must be earned. When operated correctly, these boilers can run continuously, stopping only for scheduled shut down procedures.

To take advantage of the benefits of a solid fueled boiler, a few principles on fuel flow and combustion must be understood. Here are three tips on optimizing the operation of a solid fuel fired boiler.

Solid fuel boilers can also be set up to be portable. This versatility proves to be convenient for users with seasonal hot water and/or steam heating applications.

A boiler system lives and dies (so to speak) by the flow of fuel into the furnace. Boilers that have the most problems are ones that do not have very good control over how uniform and consistent this flow is. This principle is even more important in applications with frequent load fluctuations. The system must harness control of the fuel input because even a slight interruption of supply can cause a disturbance in the load. The metering of fuel into the boiler has to match the load requirements or the process will not be in equilibrium. It may help to see the fuel as an ingredient which, along with the under-fire and over-fire air (discussed later), produces the energy.

With solid fuels, there is almost always an array of particle sizes. Because of this disparity of fuel size, the metering of the fuel must keep the flow in constant turbulence so that the different sizes will not separate themselves. If a trend of separation occurs, the furnace bed will not be uniform and the burning will be biased toward certain areas. A uniform consistency of fuel will make for a larger surface area of burning and prevent hot spots and dead air zones within the furnace.

Using a fuel transfer and metering system which implements augers to transfer fuel is an effective way to precisely control feed rates as well as maintain a consistent mixture of fuel sizes. 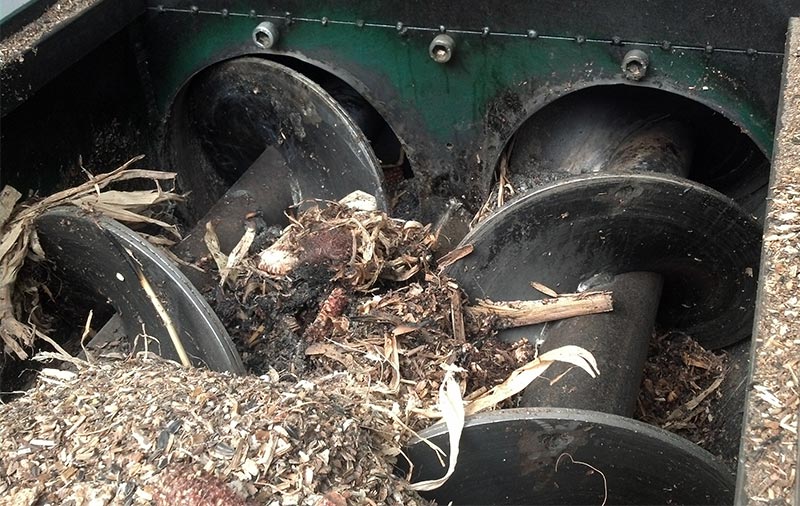 Screw conveyors prove to be much more effective than chain or belt conveyors. Flight geometry and auger casings allow feed rate projections to be much more accurate. Other types of conveyors are notorious for causing the fuel to “bridge” which leads to uneven layers of fuel on the furnace floor, causing inefficient combustion. Metering systems which implement screw conveyors also create a plug between the furnace and the outside environment. Chain metering systems do not create such a seal, letting immeasurable amounts of excess air into the combustion zone.

More often than not, solid fuel systems use too much under-fire air and, co-consequently, do not have an adequate fuel pile in the furnace. When this air/fuel ratio is imbalanced, combustion occurs prematurely which not only reduces efficiency potential, but can also induce damage to the furnace.

As solid fuel burns, it goes through a progression. First, any moisture within the fuel evaporates. Once dry, the fuel will start to release volatile gasses. As more air is introduced, the gasses ignite and release energy. This process will continue until just the carbon is left to burn out. Finally, the ashes are released and remain to be disposed of.

This schematic shows the process in which fuel enters the furnace and goes through the different stages of combustion.

When looking at the fuel pile within the furnace, there should be no grates visible. In fact, it should not even seem like the pile is burning. When adequate amounts of air are used, the fuel pile will appear to be “smoking”, but what is actually happening is the heat and air are reacting with the fuel and releasing the fuel’s volatile gasses. If too much under-fire air is used, the volatile gasses will release and combust at the same time, releasing heat on the furnace floor instead of in the upper section of the furnace where heat transfer will begin to occur. This premature combustion can rapidly reduce the life of the grates as well as impair heat transfer and even entrain ash/dust particles within the flue gasses. 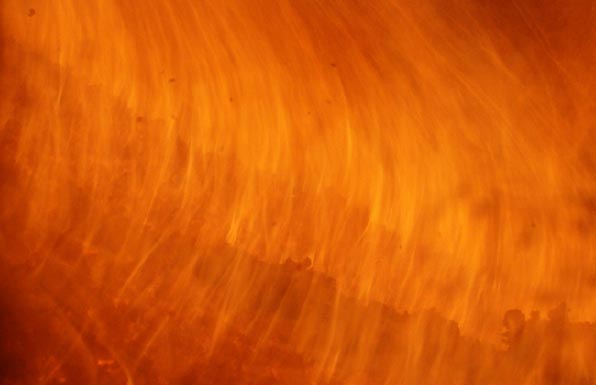 This is a great photograph showing the streams of volatile gasses being released from the fuel and rising to the top of the chamber where the combustion process will be complete.

Be careful not to reduce the under-fire air so low that the boiler loses combustion. This can be dangerous as a system may react by ramping the fan rates which will cause more of the fuel to volatile and fill the furnace. If these gases were suddenly sparked, there could be dangerous blow back and cause damage to the boiler equipment and anyone within close proximity. The best way to ensure an appropriate amount of air is to have a control system that throttles the air input along with the fuel input. For certain kind of fuels, different ratios will need to be used. Keep records of which scenarios keep the best fuel pile on the grates and enough air to volatilize the fuel at a rate to keep up with production.

Dial In on the Over‐fire Air

Once the heated fuel reacts with the under-fire air and volatile gasses are released, over-fire air is used to violently mix with the gasses and cause them to combust, releasing heat to be transferred through the boiler heating surfaces and into the water within the vessel. The goal is to achieve stoichiometric combustion; that is, where every available fuel molecule released is matched by an oxygen molecule from the fan resulting in a flue gas analysis which reveals no carbon monoxide and no oxygen. This perfect mixing is only possible in laboratory environments; however, there are ways to attain very efficient combustion within a boiler environment. 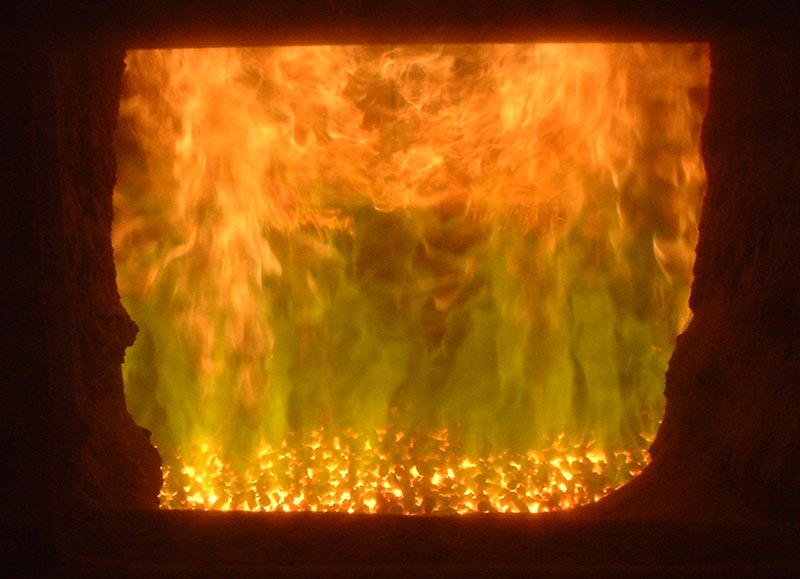 This is another great photograph of the inside of a furnace. As the volatiles are released from the fuel, they meet streams of high pressurized air from the over-fire jets. This turbulent mixing of air and volatile gasses completes the combustion process, releasing heat to be transferred within the boiler.

If there is a lack of over-fire air, large quantities of carbon monoxide and other combustibles will travel through the system and out of the stack. This waste of fuel results in heat loss and decreases efficiency. An over-abundance of combustion air results in heat loss absorbed by the excess air, also decreasing efficiency. The goal here is to find a “sweet spot” for the over-fire air. In the same way that the under-fire air should modulate with the fuel feed rate, the amount of over-fire air should be solely dependent upon the amount of oxygen in the stack. Lower amounts of oxygen indicate more efficient combustion. Take stack readings to see the correlation between the carbon monoxide and oxygen levels to determine the best oxygen setting for a respective boiler system.

Understanding how a solid fuel boiler works boils down to understanding the fuel and the combustion process as well as the equipment that controls how the fuel is burned. Improper operation can lead to unwanted maintenance time and frustration for the owner of the boiler. On the other hand, when operated properly, solid fueled boilers can be very reliable, consistent, and cost effective.